A FISTFUL OF PROZACS: And a few Xanax more 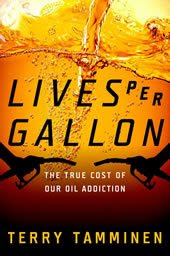 That’s what I suggest you take before reading Lives Per Gallon: The True Cost of Our Oil Addiction. Talk about depressing, I’ve barely read one chapter, a prologue and the preface — freshly added in 2009 — from Terry Tammien’s expose on how petroleum damages the health of our planet and ourselves and I already feel the need to lock my medicine chest and hide all the sharp objects. Among the interesting tidbits so far:

Petroleum was listed by the Geneva Protocol on Air Pollution as the largest single source of air pollution worldwide.

Exhaust fumes have all the nasty particles of cigarette smoke (except one); diesel fumes cause 125,000 cancer cases each year and more than 8,000 deaths in So Cal alone (four times than the amount of car crashes.)

In the past 10 years, Americans have added 10 pounds to burn an extra 350 million pounds of jet fuel per year.

That 98% of the world’s plants and animals became extinct before the awn of industrial man.

That’s just a random sample from at least 50 little passages I’ve starred or squiggled so far. And I’ve still got another six chapters, including one on drilling where I just glanced down to see that “a single exploratory [offshore] well dumps approximately 25,000 pounds of toxic metals….[and] …the USEPA and oil industry agree that more than 1 billion tons are discharged annually…. And that they are entirely unregulated.”

Screw the Ginsus. One more sentence like that, you’ll find me dead in the garage with my car running. But then from what I’ve read about exhaust fumes, I’m already committing suicide just by breathing.
Posted by Matt Walker at 6:13 AM 2 comments:

THE GIFT THAT KEEPS ON GIVING: This ISD, celebrate and protect your favorite spot with Surf-First.org 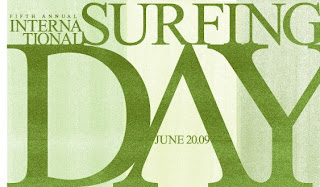 We can do it one day.This Saturday, as a matter of fact. Better known as International Surfing Day — and even better known as the summer solstice — it’s the date Surfrider, Surfing and their partners set aside to get the whole world to paddle out, make a difference and generally celebrate, display and fully fondle our saline-implanted lives. Well, here’s a way to make sure you can make all that fun count for decades to come: by taking the Surf-First survey before the sun sets.


Granted, with offshore drilling threatening almost every mainland wave at once, we’ve been neglecting some of the more local risks to America’s surf breaks. But that doesn’t mean they aren’t out there. In North Carolina alone, differing interests are pushing to allow sand-stealing jetties and block access across Hatteras Island, while in Wrightsville, there’s a fresh squabble between fisherman and surfers over Johnny Mercier’s Pier. (In Montauk, that squabble never went away.) Long Island and New Jersey are continuing to battle gas terminals. In Texas, a new law could allow private homeowners to rebuild their houses on your public beach. In Delaware, there’s a sewage outfall in the works. And in California, every single state park is in danger of being shut down including that precious Trestles we thought was saved.

That’s just a smattering of fights from this year. And, besides Trestles, not one has the benefit of concrete data of how these issues affect surfers — and vice versa. That’s why it’s never has been more important for our surfing existence and future generations to describe our individual surfing habits — where we surf, what we spend, how often we travel and where — so we can accurately depict just how important America’s unique surf spots are to our economies and way of life. But there’s a much more pressing reason to do it this Saturday than just ISD: because you don’t have much longer to take part.

“We’ve officially budgeted an intern to crunch numbers this fall,” says Surfrider Environmental Director and Surf-First co-founder Chad Nelsen. “So we need as many surveys filled out as possible this summer. We’ve got a good start — more than 2500 — but in order to make this thing as really solid we’d like to see 10,000 surveys or 400 per state. And we need them by Labor Day. Because no matter what, we’re going get the results live online by next Spring.”

That means by this time next year, the first comprehensive study of U.S. surfers —their favorite local spots and travel destinations, economic status and family traditions — will be ready and put into pure numbers for any surfer to access and use in any battle no matter how big or small. But there’s only one way to make sure your state, your town — your very break — reaps the benefits: by taking 20 minutes and taking the survey. And if we all do it on Saturday, by Sunday we could have all we need to forge a new weapon in our fight for surfers’ rights, making sure there are plenty of festive surf holidays to come. Every single day. And that’s something worth celebrating.

If you’ve already taken the survey, consider yours work done. But why not regift the idea: email your friends to tell them to take part. Remember: nobody’s gonna stand up for your break — but you.
Posted by Matt Walker at 12:33 PM No comments: 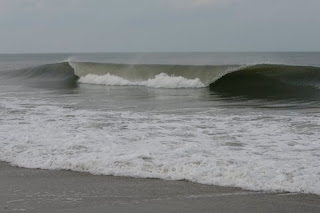 Add one more thing to the list of traits Andy Irons and I have in common. Besides sick tube-riding skills, a mean frontside cuttie and three world titles — his as ASP champion, mine as “Earth’s Hairiest Human” — both of our homes earned a spot onDr. Beach's Top 10 list for 2009 :

Granted, Hanalei Bay placed number one while Cape Hatteras came in at 7. (And, yes, I’m not really a Hatteras local, residing roughly an hour away.) But when you consider the tens of thousands of beaches on the mainland US alone, just living near a spot selected by Dr. Beach — aka Stephen P. Leatherman — is like joining an elite club. (Kind of like almost qualifying for the WCT.) And while Kauai certainly boasts bigger waves, better surfers and meaner sharks, there’s another trait all 10 share: not one has offshore drilling for hundreds of miles. (In fact, the only state with any drilling at all was California). Proof, that when people picture their ideal ocean environment to relax and play in, live and — insert cash register noise here — visit, they don’t just want petroleum way out of sight — but also out of mind.

What’s scary is besides Hawaii, all of those beaches — especially, North Carolina, South Carolina, Florida, and to some degree New York and California —are threatened by the petroleum industry who are actively working to sacrifice their precious, pristine shores and renewable coastal economies for a paltry return in revenue sharing.

So, again, I suggest that any elected official considering opening their coast, tempted by the promises of extra cash at no extra cost: first visit the places where drilling is ongoing. Compare their beach to yours, then rank the experience for yourselves. And since that ain’t gonna happen, instead of believing what the oil execs and our government tell you about ‘clean drilling’, maybe ask an unbiased Gulf Coast resident what they think of offshore drilling and the onshore infrastructure it requires.

That’s what I did. Last week in Rodanthe at Real Watersports’ Triple S kiteboarding event, Outer Banks Surfrider was seeking signatures for their “Clean Beaches =Healthy Businesses” petition. The people who needed no explanation were those who’d already lived in the shadows of derricks. There was the instructor from Alabama who nearly knocked me over to grab the pen. The tourist from Louisiana who said he grew up driving an extra four hours to Destin, FL to avoid the muck. (There’s something I’d never considered: residents taking their tourist dollars to other beach towns.) And, perhaps most telling, a Houston kiteboarder who actually worked for an oil company and — after some on-site soul-searching — finally signed. Why? For the same reason she’d rather fly to Hatteras than drive to her closest body of water. Because in — her words — “Galveston’s the biggest shithole.”

Not quite like being named one of “America’s Best Beaches,” but I guess it’s a title.
Posted by Matt Walker at 7:53 AM No comments: