ALL GONE: The oil's still there, only the media has dissipated 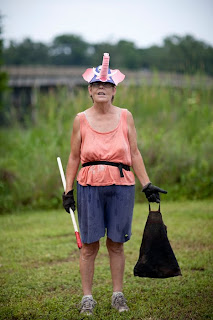 That didn't take long. What with the spill 'contained' and the oil gone (not really, as this post shows) the media's back to VMAs and Q'uran burning psych-outs and all the other nonsense that keeps us distracted so we can go back to not carrying about the Gulf Coast. That's what The Powers That Be always do in with places they deem inferior. What follows is the unedited text of what Surfing ran from my ISD trip with Patrick Ruddy. (Thanks for the photo, Pat.) I figured our nation would soon forget, just not this quickly. Now what got clipped seems more important than what ran. I've bolded that stretch for your convenience (and maybe just to yell a little more):


These beaches are clean.

For four days, that’s all we hear. But what folks say, and what you see — what you smell, inhale and gag-on — are two different things. And you can spot the bullshit from a mile away.

Or in this case, a mile up. Flying in over Pensacola Bay, brown ribbons of sheen flow out like a diarrhea slick. And the close-up is even grosser. Drive into Alabama, white sugar turns to brown stain just above the shoreline. The air turns to petrol fumes you can smell from the parking lot. And last summer’s circus turns to this season’s desert.

Miles of sand. Buckets of sunshine. Dozens of chairs. But no takers. Except for the work crews — wearing gloves, raking tar-pebbles into plastic bags to stuff in front-end loaders and, later, incinerators. The only bright-colored floats are containment booms, orange-and-yellow barriers that keep the slick from going upstream — but do little to keep it from running up the coast.

Already, one Panhandle surfer’s been treated for skin burns and cornea damage. In Seaside Beach, kids come out of the water covered in oil, only to find paper towels instead of public warnings. Walton County spends $1.25 million dollars of BP payola — not to clean up the mess, but to convince Tennessee tourists to taste the good life at a cheap price. Meanwhile, back in Alabama, the Governor spends his Father’s Day weekend screaming, “Y’all come on down!” into TV cameras (then whispers, “use your best judgment” when it comes time to swim).

“No sheen!” they scream, oblivious to the boom line a mile away.

They’re not backward — just ignorant. But for most Americans, being clueless — and a bit quirky — is still reason enough to condemn.

Would we care more if it were a different species? Not of pelican or turtle — but of human? If the people of the Gulf were all pretty and perfect? Rich and powerful? If they weren’t like the reefer-smoking Rasta sneaking rum from a Starbuck’s cup. Or the guy casting lines buck-naked in a lightning storm. If they weren’t like… this woman. Bra-less, black-toothed. Babbling ‘bout her bad back. Sporting a soiled pink elephant novelty hat, pulling cans from random park trashcans to eek by. Apparently, she and her husband are more disposable than the aluminum shells they shovel behind them and carry off for better use.

Is that the problem? God, I hope not. Because that means surfers. Locals. Tourists. Beach bums of every stripe. We’re disposable, too.

That may be the ultimate lesson of this whole disaster. How greed conquers all. It’s not just Big Oil sacrificing irreplaceable green marshlands to preserve precious black gold. But the equally callous coastal towns who, facing a catastrophic summer season, willingly urge man, woman and child into a toxic cocktail of spilled slick and cancerous dispersant — the type of chemicals that twist today’s chromosomes into tomorrow’s cretins — as long as it keeps the vacation dollars multiplying. A sweep-it-under-the-rug sales pitch straight from Jaws where the town fathers tell their own kind that everything’s safe — all because you can’t see the shark. Until it’s too late.

This situation’s just as dangerous, huge, and mean. Only this one’s invisible. And that’s what these towns are banking on. That’s why the work crews spend 12-hour shifts scraping tar off the main beaches. It’s not to keep you safe — it’s to keep you stupid. Cruise to a stretch of Condo-free coast, and it’s impossible to reach the water without touching some tacky piece of prune-sized putty with the texture of fruit filling and the smell of asphalt. Proof we’ve finally found a way to pave the ocean.

And this is only the beginning. The leading edge of a disaster with no end in sight and no answers of what to do next. BP’s CEO just paid out 1000 “I don’t knows” to the U.S. Senate. And for once, he’s being honest. Nobody knows nothing.

Nobody’s even tested for “topkill” for a month — how can they tell what it will do over time? That gradual influx of foreign chemicals and unseen contaminants. The sheen before the sheen.
Will it enter the loop current and move up the coast? Will it streak west and show the true meaning of messing with Texas? Will it circumnavigate the globe, silent but deadly?

And how long, can we surfers hold out? How many ISD’s can we spend skating and waking in some backwater bayou? How many summers can we stand in burning sand, sizing up all that suspiciously clear saline — flames of torture and desire licking our senses, sweat soaking our bodies — before we finally break down? Duck-diving and pulling in with our eyes wide open.

Truth be told, if the right wave peaked among that cluster of tarballs, I’d paddle out and pay later. Telling myself it ain’t all that bad. Not because I believed it— but because the alternative is too painful. Like losing money is too painful for businessmen. Like losing elections is too painful for politicians. Just like those poor pelicans who see a sketchy patch of water and can’t help but land. It’s in our nature. So we repeat to ourselves and everyone else what we wish was true, no matter how false it is. Because it’s those crazy lies that keep us from going insane — even if it kills us in the end.

So fuck the truth. And your surf spot, your lifestyle, and your health. And fuck your two-headed baby. Just keep telling yourself: “These beaches are clean.”