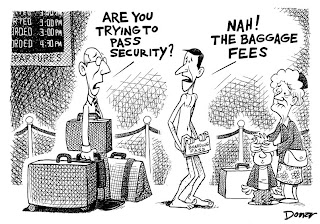 So I’m off on a trip. Not saying where, but you probably know. (Hell, half of you are already there.) Either way, the last-minute air purchase forced me to once again confront that most enraging of surf-activism issues: board charges.

Now, this topic’s been played to death as THE hot-button discrimination fight of the past decade or so. (You don’t charge for golf clubs! You don’t charge for skis!) But in the time of the Great Recession, they do. They also charge for Pepsi. Peanuts. I’m betting seat belts, pilots and cabin pressure are next. (The rest of us will be handed an oxygen mask, stuck in a giant catapult and aimed toward the horizon.) But there are upsides to such almost-equal-opportunity price gouging: a) airlines are beginning to wake up to competing in terms of how much it costs to fly your bags as yourself b) it makes it harder to complain. And when you lose the ability to whine you’re more likely to act.

So here’s how I acted: instead buying a ticket off Delta from my closest airport, I drove two extra hours to spend three bucks more for an Air Tran ride. Why? Because I hate lying. And the only thing I hate more than lying is paying $100 bucks a board each way compared to $79 a bag. So, instead of Delta making $1000; they lost $350. (Yeah, I’m using names: good actions deserve praise; screw jobs deserve punishment. So, once more: Air Tran rules, Delta drools.)

Luckily, this is the exact type of free market shit that gives CEOs and bean counters bloody, kneebuckling ulcers. (Good, you deserve it, heartless worshippers of mammon ) So if I was Delta’s CEO (douchebag), I’d do something about it. Like try to figure out when surfers would be converging on a given area and adjust my board charges. It shouldn’t be too hard: check the swell maps, see the blob, follow the arrows. Too busy? Slip an air trafficker $50 on the side to pay attention. (Those guys are the best multi-taskers in the business.) Or hire a forecaster. Or just pay some egghead to write a simple program that when the swell models lined up, the board charges disappeared. Or at least dropped to single bag fare.

If it’s “so easy a surfer can do it?” why can’t an airline? Do it enough times, they may even see it makes sense to stop charging entirely (or at least as much). Or not. Till then, surfers should just have fun boycotting the badboys. If there’s a better feeling than saving some cash, it’s screwing an airline for a change.

Remember: despite the anti-drilling rages defending Mother Ocean the past year, the primary purpose of Surf-First is defending surfer’s most selfish interests and I’d argue cold cash and cheap travel are almost as crucial as clean water, which is why we included surf trips and board charges in our survey. Don’t worry: we’re still crunching data and will update with some numbers ASAP.

Thanks to Political Graffiti for the cartoon.